Throwing Caution to the Wind: Discrimination Against Successful Women in the Bengali Community. 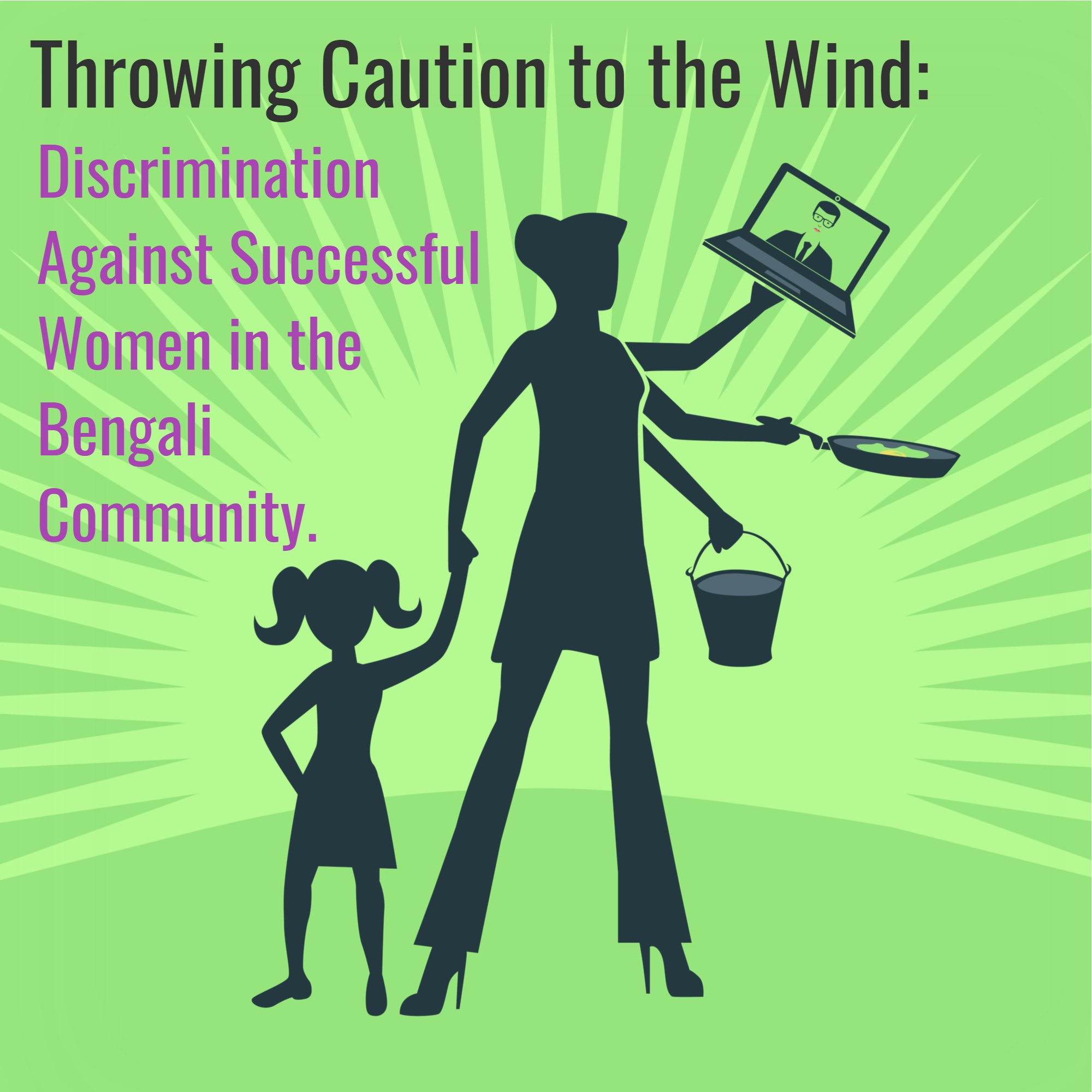 As a Bengali woman, growing up in London in the 1970’s, my mother used to say to me and my sister:

“Women are not allowed to step out of their courtyard”.

My sister would respond:

“It’s hard to apply that, especially when you live in a cosmopolitan society mother”.

Myself and my elder sister, along with many other Bengali girls, had to face this belief from within the Bengali community.

My mother was raised in a rural village in Syhlet, Bangladesh, where a rickshaw and a small boat were the only means to get to the city centre. If you were wealthy, then you could hire a van, or ask for a ‘Lytess’.

My mother did not see much beyond the boundaries of her village as she was always told not to step outside. This is because girls from a good and respected family do not go out. Girls and women from the rural village were expected to observe ‘ pudah’ by covering up. Furthermore, playing outside constantly could increase the chances of a girl becoming too dark and make her less eligible for marriage.

During the time my mother was growing up, Bangladesh followed a mixed system. This system comprised of mainly state laws alongside Islamic laws. As a result, there are now ingrained tensions between what is considered Bengali identity and what is considered Islamic. Many aspects of Bengali culture are now regarded as by-products of Hindu influence from a time when Bangladesh was East Pakistan.

Over the past decade, Bangladeshi women have made significant progress in health, education, and the workplace. However, most women’s lives remain centred on their traditional roles as mothers and wives. Despite this, many women within the Bengali community in London continue to struggle to gain equality with their male counterparts.

This inequality lived on when my parents arrived in England. My sister and I would see boys and men moving freely with no restrictions in their personal or professional lives. However, the closest my sister and I got to observe this freedom was through the glass window frame of our home. We were fortunate enough to also be able to attend college and get part-time jobs as, over time, our mother reduced her conservative thinking. She even began to wish that she herself had been given the

opportunity to learn English and work.

Initially, like other first-generation immigrants who arrived in the UK in the late 1960’s, my mother feared that we would lose our Bengali culture, religion, and traditions. This fear was especially true when it came to girls as the only way to measure female success within the Bengali community was through marriage and motherhood, which my sister eventually achieved.

However, my sister shockingly went against the grain and educated herself whilst working her way up the career ladder.

Simultaneously, she managed to look after her children, husband, and home to also achieve the recognition of being a good wife and mother. This recognition meant that my sister’s children, especially the girls, would be eligible for marriage into a good and successful family.

It also meant that my sister had upheld her duties and raised her children successfully even though she worked. Not everyone in the community saw my sister working as a success though. Our male counterparts, who were born and raised in western society, would be praised by all in the community for having a family alongside a successful career. However, my sister was often subjected to passive aggressive remarks, negativity, and assumptions that she must be a terrible wife and mother because she went out to work.

This led my sister to never speak or share with others in our community about her successes. She would only talk about her career success with her close friends and immediate family members to avoid the shame, stigma and disapproval that came with being a working mother. My sister often faced insular discrimination from within the Bengali community with regards to her achievements.

However, she fought this discrimination secretly by empowering herself through education. The negativity and stigma used to tire her out and, at times, it led her to feel resentment towards the community. At other times she felt demotivated, but she knew that she had keep going as she wanted to pave her own way in life. She also wanted to achieve freedom and status for herself and her daughters in the future.  It was for this reason that my sister never gave up.

Like my sister, many other women are silenced within the Bengali community due to a lack of support from their own family members. My sister was lucky to have us and her husband to support her journey. Perhaps, if she had other people to speak with too, she would have felt less strained and unrecognised for who she was. Cultural tensions and expectations can have a huge impact on our mental health and wellbeing. It is important that women from all communities have a space to

explore these tensions and expectations along with the impact they have on their lives and wellbeing.

If you have been affected by any of the issues discussed in this blog post, Talking Elephants can support you. We provide culturally sensitive counselling in a variety of different languages and welcome people of all ethnicities, sexualities, gender identities and faith backgrounds within our service. You can contact us on 0203 488 6299 for a free initial consultation.